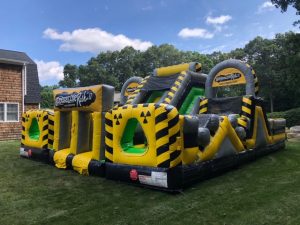 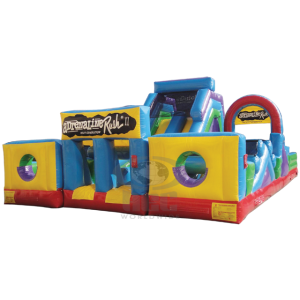 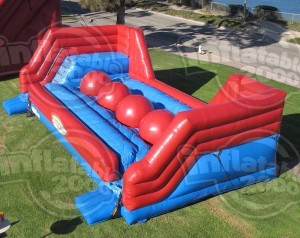 Leaps & Bounds
39L x 21W x 12H
$985.00
This game features a series of four giant inflatable balls which challengers must leap across to reach the other side.  This is NOT a bounce house, children can’t bounce on the unit.

Black Ops Obstacle Course
35L x 25W x 19H
$750.00
Are you ready to take on the mission? This two lane obstacle course is a one of a kind experience allowing the participants to have the feeling that they are truly engaging in a war of dexterity. Battle your opponent to victory as you make your way through the bricked wall entrance, down the path of stone pillars, crawl throughs and passageways. The journey doesn’t end here as you reach the rock climb wall leading to the uniquely designed teeter-totter pivoting bridge, then down the slide to the finish line! 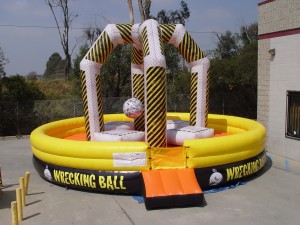 Race to the Top
35L x 35W x 8H
$750.00
This is a 2-4 player game. Each player races to the top using the rope and grabs one of the four colored batons for their lane. Once the player has the first baton, they slide down to the same area where they started from and places the first baton on the Velcro strip located on the top of the wall and then proceeds back to the top to retrieve another baton. The first player to have all of their colored batons placed, is declared the winner! 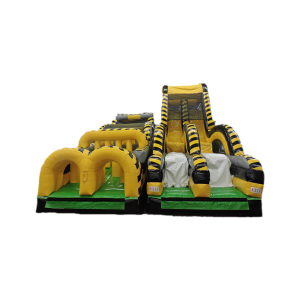 Atomic Nuclear Rush
55L x 21L x 21H
$1,000.00
This unit is a gigantic three piece design that weighs over 1500lbs. The final piece is the Atomic Drop, a gigantic Rock Climb Slide that ends with a drop into an air bag. This is a crowd pleasure for children of all ages. 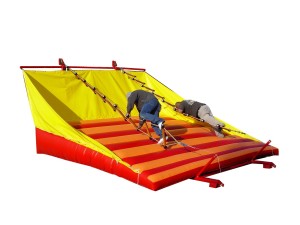 Jacob’s Ladder
17L x 15W x 9H
$600.00
This is a race against an opponent and a test of your own skill. Each of two competitors try to climb up the rope ladder. The one who makes it to the top first wins. 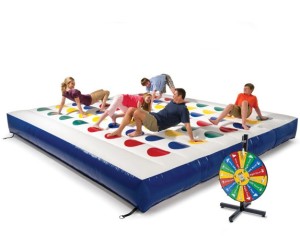 Human Pretzel
15L x 15W x 15H
$275.00
Bend, Twist, Stretch! This clever new twist on an old classic game is perfect for any occasion and fun for all ages